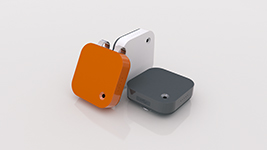 Memoto, the startup behind the stamp sized lifelogging camera, releases a documentary film about the “lifelogging” phenomena. Two film students were sent out in the world to find out how lifelogging is going to change how we remember our lives, how we take care of our health and if there are any risks with documenting your life. The documentary Lifeloggers will be released in public on May 28th. Memoto will hold a press preview at The Next Web conference in Amsterdam April 25th.

(Sweden, April 24, 2013) – Memoto, a Swedish startup with the goal of giving everyone a photographic memory, has financed and produced the film about lifelogging. The documentarywas recorded by Amanda Alm and Ville Bloom, two young students from a film school in Stockholm. They spent six weeks of the summer 2012 to travel the globe and meet pioneers, entrepreneurs and users of lifelogging services. The question they posed was: “how will lifelogging change our lives”?.

At TNW Amsterdam, there will be a press preview of the 25 minute long film. (Sign up for the preview here: https://memoto1.paydro.net/)

“We didn’t know anything about “lifelogging” but we soon realised that it’s a trend that will affect all of us” said Amanda Alm. “It was super exciting to meet people like Gordon Bell and Steve Mann who more or less have invented a whole new way of documenting peoples’ lives. What they had to tell about the future was fascinating.”

Lifelogging – to register your life with technical tools and services – has been an obscure hobby for a few technically minded people. But with wearable computers getting cheaper and the number of smartphone-apps, tracking everything from sleep (i.e Sleeptrack) to exercise (i.e. Runkeeper), exploding, the interest for lifelogging has grown.
“Memoto is a part of this trend and we wanted to listen to what other people, who have been active lifeloggers for years, think about the future. Instead of just emailing and asking and keeping the answers to ourselves, we decided to meet them in person, film the meeting and make a movie out of it so more people can take part of the results,” explained Martin Källström, CEO at Memoto.
Lifeloggers will be released in public at www.lifeloggersmovie.com on May 28th. See the trailer for the film here.