Sensors in Smartphones to Top 10 Billion Unit Shipments in 2020

Today’s smartphones contain a plethora of sensors which provide an amazing array of features and functionalities boosting the overall user experience of the device. Some premium smartphones have already integrated more than 15 different sensors and this number is set to increase due to technological advances in MEMS and other sensor technologies driving newer use cases.

According to Counterpoint’s Components Tracker research, all sensors combined, more than 6 billion sensors were shipped within smartphones in 2017 and it is estimated to cross the 10 billion mark in 2020.

As per Pavel Naiya, Senior Analyst at Counterpoint Research, “Sensors such as Accelerometer, Compass, Gyroscope and Ambient Light Sensors (ALS) have become ubiquitous across smartphones even down to a sub-US$50 category. These sensors have been the key components to make a phone smarter carving out meaningful use-cases from navigation, gaming, augmented reality to preserving battery life and much more.

Similarly, biometrics base sensors in smartphones have seen greater adoption in the last few years. For example, more than a billion smartphones to be shipped in 2018 will sport a fingerprint (see here) sensor and close to 400Mn will feature some form of face unlock biometric sensor solution.”

Mr. Naiya, added, “Health based sensors such as Heart Rate, SpO2 are picking up traction though mostly in premium offerings and mainly driven by Samsung for enhancing its S Health offering. Adoption by other brands will depend upon their companion wearables strategy. However, for some OEMs, rising Bill of Materials (BoM) costs pressure will be a barrier to adopt these special sensors.”

Commenting on proliferation of other sensor categories, Senior Analyst, Jene Park, highlighted, “Iris scanner, 3D sensing, Gyroscope, NFC will be popular sensors this year, powering features from facial biometrics to AR/VR, immersive gaming, digital payments and others. Almost one in two smartphones will integrate an NFC solution or a Gyroscope by 2020.”

Mr. Park, added, “Apple, Samsung and Xiaomi were the top three brands driving Gyroscope shipments with a combined 60% share in 2017. In NFC based smartphone shipments, Samsung, Apple & Huawei alone captured 83% of the market. In summary, a handful of top brands are focused to leverage on-device sensors to drive multiple use-cases and services and differentiate to succeed.”

Commenting on potential for Sensor Fusion solutions, Research Director Neil Shah, said, “Sensor Fusion platform adoption will breathe more life into smartphones and emerging categories such as smartwatches, AR/VR devices, automotive and other IoT enterprise solutions. The sensor fusion capabilities in a device will help OEMs craft newer experiences by detecting context, emotion based on the different physiological variable states from the sensor data. The key suppliers such as InvenSense (TDK), Samsung, Mobileye, ST Micro, Bosch, AMS are driving this trend across different segments from smartphone to wearable to automotive.

Mr. Shah, added, “Sensor Fusion platform is powerful not only for medical applications to detect muscle contraction or sweat or body temperature or heart rate variation but also for non-medical applications from immersive gaming to accurate indoor navigation to preventing car accidents monitoring the driver. The adoption of sensor fusion is what will make devices actually smarter as it’s all about data and drawing out contextual awareness from it.” 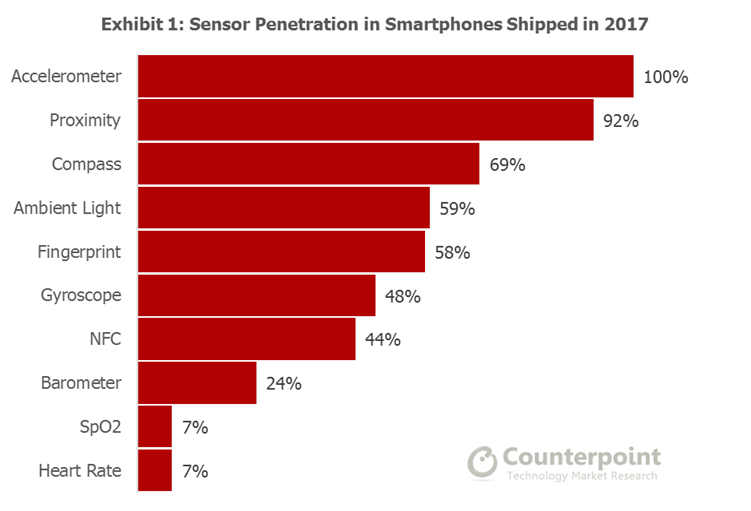